This article appears in the Fall 2019 issue of Connexions magazine; subscribe here. 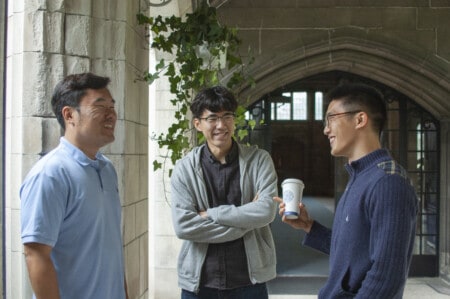 As the first-born of two pastors, I’ve always felt the weight of responsibility in church. Since my youth, I had taken on responsibilities – leading praise, leading missions, or preaching to children. Church was a happy place, but it was also a place where I was looked to for direction, publicly and privately.

Through observation, I learned early on that all many people needed to find solace from their fears was an attentive friend. Active listening – nodding, eye contact, repeating words, asking clarifying questions – was one of the greatest tools available to a pastor, and I had many opportunities to use it during my developing years.

Consequently, I always assumed that I knew what it felt like to be on the other side of these conversations. But I was wrong.

My Master of Divinity studies at Knox include times to debrief with classmates who are also serving in field placements. As I sat with my classmates, I revealed the difficulties I faced as a second-year youth pastor at my home church. Each person around the circle nodded and looked intently at me – and I was surprised to realize how strange and new this felt.

As I tried to make sense of why this sensation of being heard was new when it should have been familiar, I realized that I had never truly been afforded a space or a people who could both understand what I was going through and also had enough relational/professional distance that I would not need to worry about burdening them with my worries. Because my parents had always been my pastors and my peers were co-workers, I could never truly open about my experience in church – not because they were unwilling to hear me, but because I was unwilling, and maybe unable, to fully reveal myself to them. There was also the underlying culture of hard work and sacrifice that pervades Korean immigrant churches and their staff; it would not be appropriate for me to speak of my troubles when I knew the other leaders endured just as much, and more.

However, here at Knox, I was among other aspiring pastors who were also in field placements, who understood my struggles yet had no professional associations with my church, in a class built of people gifted in the art of active listening. I found opportunity to divulge myself to attentive, empathetic hearts. My words were met at times with knowing smiles or grave looks, always at the right times, demonstrating that I had the full attention of my peers who had somehow become my pastors in our weekly sharing circles. As I finished these check-ins, I knew that the struggles I had walked into class with weren’t closer to being resolved – but they also felt less complicated than they had seemed.

We had many things to learn about our Theological Field Education (TFE) placements, including appropriate boundaries between congregation and clergy, proper ways of approaching church finances, emerging ethical conversations in the church, and much more. Yet what I found most impactful insight was this subtle look into one of the values of my vocation: the peace afforded to me in caring eyes and listening ears. For this revelation, I would like to give a heartfelt thanks to my fellow classmates and to the instructors of the course, Professor Angela Schmidt and Michael Anderson, who led with professionalism, gentleness, and great warmth.

Joshua Heo is a Master of Divinity student at Knox College.