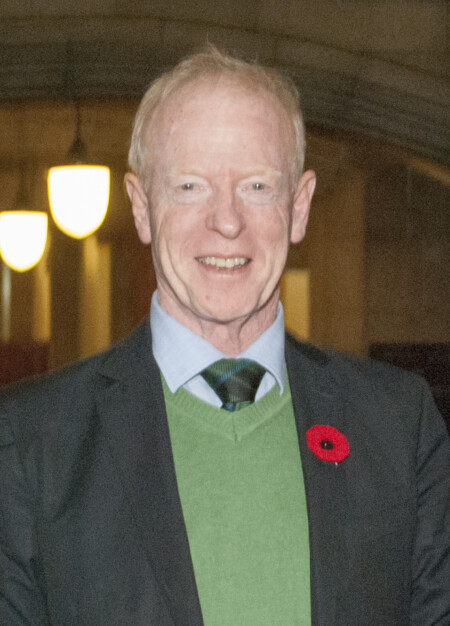 Sandy Henderson receiving the KNOXFRA Award of Honour in 2017.

Knox College is sad to announce that William Alexander (Sandy) MacDonald Henderson passed away on September 14, 2022. Sandy lived at Knox from 1970 to 1979 while completing his Bachelor of Physical Education and Bachelor of Education degrees. During his years at Knox, Sandy served as a don and played on the Knox hockey team. Sandy had a large impact on others while living at Knox and has always shown a strong commitment to the Knox Community. In 1987, he was one of the founding members of the Knox Former Residents’ Association and served on the committee for almost 30 years, including several years as treasurer.

In 2017, Sandy received the Knox College Former Residents’ Association (KNOXFRA) Award of Honour. Sandy’s commitment to Knox residents and the broader University of Toronto community through his long career at Hart House, and his role as a founding and long-time dedicated member of KNOXFRA, spurred his nomination and choice as award recipient.

The following obituary is posted on the Dignity Memorial website, care of Thompson Funeral Home.

With profound sadness, the family of Sandy Henderson announce his death on September 14, 2022, at Mt Sinai Hospital, Toronto, following a short series of illnesses. His passing leaves an enormous and sad gap in the lives of many people.

He was predeceased by his beloved wife, Patty (2015), and is survived by four children, Emma (Scott) of St. Albert, Alberta, Kate (Ben), of Gravenhurst, Taylor Henderson and Graeme Henderson, Toronto.

Sandy was the third child of the late Rev Bill and Peggy Henderson. He was predeceased by his younger sister, Clara (2016) and is survived by older siblings, the Rev John Henderson (Dorothy), Waterloo, and Marg Henderson, Toronto.

Sandy always had a fondness for sports and fitness. After playing football at the University of Toronto, Sandy made his way south on campus to Hart House and worked for more than 30 years as the Athletic Director During this time he also displayed a deep commitment to Hart House Farm in Caledon, Ontario where he could be found cutting Christmas trees, piling wood, or tending to the farm. Sandy’s love of sports continued in the later years, where he worked with Covermaster Inc.

Above all else, Sandy will be remembered as a people person. He had a remarkable memory and delighted in connecting people together. He had a tender spot for elderly and vulnerable people and often warmed their hearts with some of his fresh home baking.

His life was full of family, food, sports, laughter, and faith. He had diverse interests and loved sharing the product of his interests with others. Namely bee keeping (Bruce Beach honey), baking especially countless fruit pies, buns and scones and homemade maple syrup. Sandy loved stream fishing and hunted for ginseng and morels in secret places which could not be revealed. He cherished playing hockey each week with long-time friends. He was an elder at Trinity York Mills Presbyterian Church, Toronto.

Bruce Beach, on Lake Huron, held a special place in Sandy’s heart. As a teenager, he delivered bottles of milk along the beach for Kincardine Dairy, a job which was the perfect fit for his outgoing personality. He could talk to every resident of the beach before noon and, for many summers following, he did odd jobs for cottagers. Sandy’s parents, relatives and, later, Patty’s relatives, all had cottages nearby when Sandy and Patty built a beautiful home on the sandy shores of Lake Huron. The laughter and warmth of the social gatherings were legendary.

Sandy never missed the Kincardine Pipe Parade on Saturday evenings, Sunday morning baseball at the beach and, at four on Sunday afternoon, you would find him in a little grove on Bruce Beach setting out benches and hymnals for an outdoor Sunday worship.

His engaging personality, his extensive friendships, deep loyalties, and his joie de vivre will be remembered and cherished by all who knew him.

Thank you to Dr Woo, Dr Colman and Dr Moore at Mt Sinai and the attentive nurses. Thanks also to the loving care he received at Toronto Rehab on 9S.

In lieu of flowers you may make donations to:

Fond memories and expressions of sympathy may be shared at www.ThompsonFH-Aurora.com for the Henderson family.