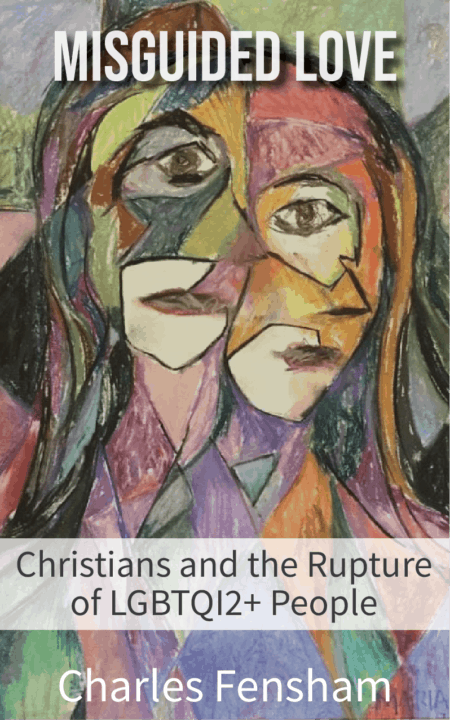 This interview first appeared in the Spring 2020 issue of Vocations, Knox College’s magazine. View the issue, or subscribe, here.

Following is an interview with Professor Charles Fensham on his latest book, Misguided Love: Christians and the Rupture of LGBTQI2+ People, published by the Journal of Pastoral Care and Counselling and produced by Harvard University Bookstore. The Rev. Dr. Charles Fensham has been Professor of Systematic Theology at Knox College since 2002. He is interested in the study of the church (ecclesiology) and its intersection with mission studies and ecology, with a focus on public missiology.

Dr. Fensham has created a series of introductory videos about his book at bit.ly/IntroMisguidedLove. Learn more about Dr. Fensham here. His book is available for purchase via the Harvard University Bookstore.

Note: At Dr. Fensham’s request, we use the descriptive phrase “sexual and gender minorities” rather than the acronym LGBTQI2+, as it is more inclusive and less cumbersome.

Why do church and society need this book? What are your hopes for this book?

When I started this research project about five years ago, it was because I was very deeply concerned about the way sexual and gender minority people are experiencing harm in Christian communities. The book is my attempt to figure out the puzzle of how a faith that professes love can take a path that harms others. And so I explore the history – the history of Christianity, and the rise of violence against sexual and gender minorities – and consider a Christian response.

My hope is that this book will be a resource. My book invites readers who are Christian to consider the dimensions of harm in this conversation in the church. I am not naïve; I know that those who disagree will still likely find reason not to agree with the content. But for people who struggle with their own sexual or gender status, I hope it will be helpful to know the history, and see that it is not biblical or Christian.

I also hope that it will be a resource for those who want to make a case in favour of inclusion, to say, “Here’s the history, do you know this? Do you know where the myth of Sodom comes from? Do you know that the word homosexual doesn’t appear in the Hebrew or Christian scriptures, despite our modern translations?” And so on. The book explores ethics, the social and psychological origins of hatred against sexual and gender minorities (including what shapes our biases), and the Bible. It’s peer reviewed, shared widely for input and critique, and historically researched, and so people can trust what’s there.

There is no Christian scriptural basis for causing harm to our neighbors – inside or outside Christian communities, and Christian teaching that doesn’t affirm the humanity and the wholeness of sexual and gender minority people does harm. This isn’t simply a theological debate with different perspectives, or something about which we can graciously disagree. This is a matter of causing material harm – to the point of death. We need to find a way to repent, and a new path of ethical discernment in relation to sexual and gender minorities.

What different perspective do you offer?

One of my reviewers wrote that there is no other book like this on the market, even though there’s a lot of writing and theology on this topic. The point is not so much that the information I use is new, but what’s different is the way I try to employ this information theologically. I include significant historical data, and I reflect theologically on that.

Most arguments centre around whether you should accept sexual and gender minorities, but they pass over the history. Those who want to exclude sexual and gender minorities often say there is a wonderful and beautiful history of Christian purity where these kinds of activities are excluded – but that’s simply not true. I actually became very depressed researching this, because as a committed Christian, I could not conceive of how people who claimed to follow the teaching of Jesus Christ could be a part of such horrible behaviour: child abuse, hanging of young boys, drowning teenagers in barrels, public burnings, and more. So it was entirely disheartening, as a Christian, to read all of this history, and then to hear Christians today say, “It’s because we love people that we do this kind of thing.”

How does your own journey inform your approach to this topic?

All theology is biographical; our theologies are shaped by our experiences and our process. For those primarily oriented heterosexually, their experience is simply a given. Because this is the normative experience of our cultures, we often unconsciously judge and act out of the privilege of that experience and cultural affirmation.

I am personally aware of the power of normative privilege, because I was a South African white man who grew up under the apartheid system there. Today I understand much of my early experience and cultural bias in the light of the “white privilege” in which I was raised and from which I benefited – even though I didn’t see it at the time. I see parallels between my experience there of the church doing the wrong (racist) thing, and the church now continuing to do the wrong thing in its dealings with sexual and gender minorities.

Another significant way my theology has been shaped by my experience was through an encounter with a friend who then committed suicide. This was the first time I really woke up to some of the deep tensions around sexual and gender minorities. I started examining my own feelings toward myself and towards others, and reconsidering the kind of things I, as young pastor, had unthinkingly said to other people.

In my own journey from internalized homophobia, to struggling with the pastoral challenge of suicide of gay men in my ministry, to facing my own awareness of sexual orientation, I became convinced that Christians today need a new repentant way of engaging sexual and gender minority people.

Now, after these years researching and writing, my goal to keep the right focus – that is, preventing the harm of others, particularly young people. It’s easy to take disagreements personally, but this is about something far bigger. I cannot become like the people I oppose in this process; I want to act with grace and not harm others. How do I work for the good of others, without harming the person who’s doing harm? That’s an ongoing struggle, and not easy.

How does your research inform your teaching in a broad sense? How does it benefit your students?

My philosophy of teaching is that my research needs to integrate with what I do. One of the core courses I teach is Church History and Sacraments, which is about ecclesiology – the study of the church. My first book, Emerging from the Dark Age Ahead: The Future of the North American Church, was my attempt to wrestle with that question as I teach. My book on spirituality, To the Nations for the Earth: A Missional Spirituality, is similar: what does it mean to be a church that is truly spiritual, but not disembodied?

I’m also a missiologist, so I’m interested in the witness of the church in the world. The way that sexual and gender minorities have been treated has had a profound effect on how people outside the church view us. What is our public presence? If you talk to people who are religiously unengaged (the fastest-growing sector of our population in Canada and the U.S.), their perception of Christianity is very negative, and the homophobia that they see in Christianity is one of the key elements in that. It’s a blockage, something that keeps people from saying, “I want to embrace this faith.” They say instead, “Christians talk about love, but they don’t love.”

What hope do you see around this issue, for the church or for society?

Social attitudes have a way of swinging back and forth; at the moment the U.S. and Canada are swinging back when it comes to rights for sexual and gender minorities, particularly transgender people. There’s a powerful backlash, as we see in politics. Some days it’s hard to say what direction things are moving; but it feels like five steps forward, three steps back.

I see hope in the young people. In the PCC, for example, the youth movement has been very critical of what’s going on, and the younger generation of the Presbyterian Church has taken this up as something that needs to be addressed.

Presbyteries are now voting on the issue, and the votes are very close, being decided by very small majorities. So clearly, whether these particular remits pass or fail, almost half of the PCC is saying that we need change. It can’t be business as usual, whatever happens at this point. That makes me quite hopeful.

What am I hoping for? I’m hoping for the church to stop doing harm. I’m not really hoping for something for myself now; I’m 63 years old. But it does matter to me personally as a Christian that we stop harming people. That is the issue. It makes a difference for that teenager in smalltown North America who’s told he’s bad, going to hell, etc., because of his transgender awareness. This isn’t just theoretical, a theological debate.

One affirming church I know broadcasts their services every Sunday. And they get hits online from the deep south and from all around, from people saying, “I was going to commit suicide – but since I found your broadcast, I can make it. I can watch this quietly in my room and know that I’m not alone, that there’s a place where I’m welcome.”