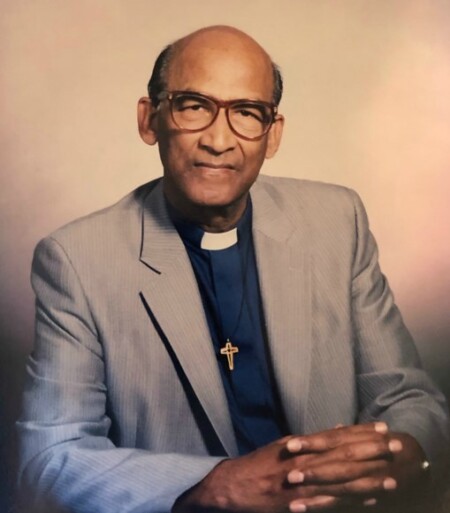 Reverend Kenrick Keshwah was born on July 2, 1922, in Trinidad and Tobago and passed away on September 26, 2020, in Scarborough, Ontario, at the age of 98 years.

Obituary as posted at www.dignitymemorial.com/obituaries/toronto-on/kenrick-keshwah-9379154:

Kenrick Keshwah lived a long life – he was in his 99th year. Few of us will see a whole century on this earth, yet Kenrick was blessed to experience this. He witnessed so many of his friends and family grow up and pass through life. Witnessing so many highs and lows during the last century must have been quite the experience. Imagine all the changes he would have seen in: technology, society, and even in the dynamics of family life. It seems like the last 100 years in human history has seen more change than in all the centuries and millennia that people have walked the earth. Yet with all this change during his life, two things remained constant for Kenrick; two things never changed – they were his love for his family, and his faith in Jesus Christ.

One of ten children of Bachia and John Keshwah, Kenrick grew up and attended school in Central Village, Santa Cruz, Trinidad. His love and dedication for his family in his early childhood was exemplary in addition to support of friends, neighbours and the community at large. As affectionately, called, Sonny always placed others needs ahead of his, quietly working for the love and service of others, even if it meant forgoing a scholarship opportunity to Scranton University, Pennsylvania, USA. One day as he was driving a truck for his employer in Trinidad, the young Kenrick almost struck a woman crossing the road. Shaken up by the experience she fled the scene. After some time of searching, Kenrick was reunited with the woman and it was love at first sight. The families soon got to speaking, and on September 26th 1952, Kenrick Keshwah married Polly Roopnarinesingh. As faith would have it, it was on September 26th, 2020 that he was reunited with Polly, who predeceased him twenty-seven years prior. The two completed each other like few couples do. In the years that followed, they were blessed with seven children: Kenneth, John, Alex, Alice, Zita, Elizabeth, and Luna.

Kenrick worked hard to provide the best for his family. In Trinidad he worked from 7am to 9pm six days a week to take care of his beloved wife ‘Polly’ and their children. During the day he worked for the Stollmeyer family import and export company, and in the evenings, he drove a taxi. When his eldest son was of age to go to university, and was accepted at McGill in Montreal, Kenrick dreamed of bringing his whole family to Canada to give them all an education and greater opportunity.

In the summer of 1970, Kenrick made the bold and courageous move to Canada. Like many immigrant families, this was a big risk, with lots of uncertainty. However, after settling in a modest home on Nairn Avenue, their family blossomed and Kenrick’s dreams came true – as all seven children received a university education. As his children grew up, and began their own families, Kenrick’s life was further blessed with the birth of 17 grandchildren, and 6 great-grandchildren.

Kenrick continued to work hard to provide for his family in Toronto. In 1987, at the age of 65, he retired from his Shipping and Receiving job at Givaudan Limited. However, Kenrick’s retirement was short-lived. He decided that now it was his turn to go to university. He pursued his life-long dream to go to university, and enter into full-time ministry. He studied at both York University and at Knox College at the University of Toronto, School of Theology. There he completed his studies and was ordained as a Presbyterian Minister.

Kenrick wanted to be a minister at a young age, and was very involved in his church in Santa Cruz and San Juan Presbyterian Church in Trinidad. But with the early passing of his father, and then beginning a family of his own, his ministry aspirations were put on hold. Once ordained in Toronto, Reverend Ken faithfully, and joyfully, served Patterson Presbyterian Church located on Harvey Avenue, just a short walk away from the family home. Kenrick was a charismatic preacher, possessing tremendous gifts for story-telling and his ability to make the scriptures connect to everyday life. His warm smile, outgoing personality, positive attitude, and deep faith, all served him well in this new stage of his life’s journey. Every Sunday for years, the whole family went to church there, and most parishioners were in awe that usually half of the choir comprised of Kenrick and Polly’s children.

Few people knew that for almost 90 years of his life, Kenrick Keshwah prayed on his knees beside his bed each day; the same way he was taught as a boy. There he spoke to his loving God. It was in the silence of those moments, that heart spoke to heart. Here, he drew strength, knowing that God loved him and would take care of him and his family through everything in life. His personal relationship with God gave him strength during the tough and uncertain times. It was in prayer that he regularly expressed gratitude for the many blessings in his life, and this yielded the peace, joy, love, confidence and happiness that radiated out of Kenrick Keshwah this past century. When you would ask ‘Papa, Grandpa, or Reverend Ken,’ how he was doing, he would often reply that God has blessed him beyond his wildest dreams, and then he would re-tell the story of him coming to Canada, and how proud he was of his children, grandchildren, and great-grandchildren. His favourite scripture passage to quote was John 10:10 “I have come to give you life, and life in abundance.” This passage was probably the core of his daily prayer time, thanking God for the abundant love he received from his large family, and the many blessings they all received in their new homeland.

Reverend Kenrick Keshwah was generous with his time in the service of others. He was comfortable and confident speaking to anybody on almost any subject. His unique ability to connect with others and share a conversation with them led him to touch many lives. Reverend Ken’s humility and authentic love for others made him someone that everyone remembered when they met him; even if it was only for a short time, or only once. He treated everyone with respect, kindness, and love, regardless of who they were, or what they did for a living. His caring nature as an extrovert allowed him to make a difference in countless peoples’ lives – from the servers at Swiss Chalet or Red Lobster, the cashiers at Tim Horton’s, and more recently, cleaning or support staff working at the hospital, or care facility he was at, Reverend Kenrick Keshwah lived his faith effortlessly, and genuinely. He was a role model for all who knew him, and will be sorely missed by us all.

“Well done, good and faithful servant… Enter into the joy of your Master.” (Matthew 25:23)