The possibility of forgiveness: core questions in ministry and therapy 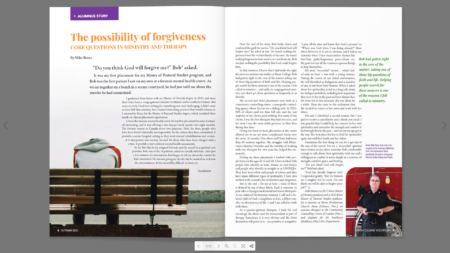 “Do you think God will forgive me?” Bob* asked.

It was my first placement for my Master of Pastoral Studies program, and Bob was the first patient I saw on my own at a forensic mental health centre. As we sat together on a bench in a secure courtyard, he had just told me about the murder he had committed.

I graduated from Knox with my Master of Divinity degree in 2011, and since then I have been a congregational minister in Malawi and in southern Ontario. But more recently I had been itching for something new and challenging. I didn’t want to leave full time ministry, but I wanted something practical that would enhance it. I returned to Knox for the Master of Pastoral Studies degree, which included three hands-on clinical placement experiences.

I chose the forensic mental health centre for my first placement because it sounded interesting, and it was offering a two-day-per-week option over eight months. The forensic system in Canada serves two purposes. First, for those people who have been found criminally not responsible for the crimes they have committed, it provides a secure hospital setting as they work toward rehabilitation and eventual re-integration into society. Second, for those who have been charged with a crime, it provides court-ordered mental health assessments.

In my first day in my assigned forensic unit by myself as a spiritual care provider, Bob, one of the patients, asked me to talk with him. After just a few minutes of conversation, Bob began to tell me about the murder he had committed. He was not giving me details, but he wanted me to know the circumstances. It was incredibly difficult to listen to.

In that moment, I knew that I had made the right decision to continue my studies at Knox College. Bob had gotten right to the core of the matter, asking one of those big questions of faith and life. Helping people search for these answers is one of the reasons I felt called to ministry – and sadly, in congregational ministry you don’t get those questions as frequently or as directly.

My second and third placements were both at a community counselling centre, a non-profit counselling agency whose fees are on a sliding scale. In 2021, 92% of clients paid less than full rate, and the vast majority of my clients paid nothing. For many of my clients, I was the first therapist they had ever seen, and for most I was the most stable presence in their lives during that time.

Doing two back-to-back placements at the centre allowed me to see my more complicated clients over the entire 16 months. One client and I have had more than 60 sessions together. She struggles with Dissociative Identity Disorder, and the stability of working with one therapist for two years has helped her immensely.

But in the end – for me at least – none of them is defined by any of these labels. Each is someone in pain who is trying to understand and lessen their pain. As an ordained Presbyterian minister, I call each a beloved child of God, a neighbour to love, a fellow traveller on this journey of life – and I am called to walk with them.

As a psycho-spiritual therapist, I look for and encourage the divine and the transcendent as part of therapy. Sometimes it is very obvious and the client themselves will point to it – as a positive or a negative: “I pray all the time and know that God is present,” or “Where was God when I was being abused?” Most times, however, it is not so obvious, and I follow my curiosity when I hear transcendent themes like love/hate, guilt/forgiveness, peace/chaos, etc. My goal is to use all the resources a person brings to help themselves.

My most “successful” session – which lasted only an hour – was with a young woman. During the course of our initial conversation, she self-identified as Indigenous and a member of one of our local First Nations. When I asked about her spirituality, it led to a long talk about her Indigenous beliefs, including how important they were to her in the past and how distant they felt from her at that moment. She was silent for a while. Then she came to the realization that she needed to return to her roots and work with her elders.

She and I scheduled a second session, but I was glad to receive a cancellation and a thank you email. I was grateful that I could help her connect to her own spirituality and remember the strength and comfort it had brought her in the past – and not let my ego get in the way. The best place for her to find her spirituality again was with her family and her elders.

Sometimes the best thing we can do is get out of the way of the sacred. For me a “successful” spiritual intervention occurs when someone feels comfortable enough to talk about their spirituality with me and a willingness to explore it more deeply as a resource of strength, comfort, grace, and healing.

“Do you think God will forgive me?” Bob had asked.

“God has already forgiven you,” I responded gently. “But we humans are a tougher nut to crack. Do you think you will be able to forgive yourself?”

Mike Burns is a 2011 Knox Master of Divinity graduate and a 2022 Knox Master of Pastoral Studies graduate. He is minister at Burns Presbyterian Church, Mosa (Glencoe, Ont.), an associate therapist at the Community Counselling Centre of London (Ont.), and chaplain for the Southwest Middlesex (Ont.) Fire Department.