From Korea to Canada — to study Scottish history: reformation insights across time and cultures 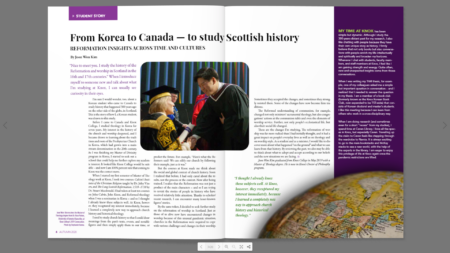 “Nice to meet you. I study the history of the Reformation and worship in Scotland in the 16th and 17th centuries.” When I introduce myself to someone new and talk about what I’m studying at Knox, I can usually see curiosity in their eyes.

I’m sure I would wonder, too, about a Korean student who came to Canada to study history that happened 300 years ago on the other side of the globe, in Scotland. This is the story of how I, a Korean student, was drawn to this study.

Before I came to Canada and Knox College, I studied theology in Korea for seven years. My interest in the history of the church and worship deepened, and I became drawn to learning about the traditions and roots of the Presbyterian Church in Korea, which had grown into a mainstream denomination in the 20th century. As I was finishing my Master of Divinity program in Korea, I started to seek out a school that could help me further explore my academic interest. It looked like Knox College would be suitable – and now I am 100% percent sure that coming to Knox was the correct move.

When I started my first semester of Master of Theology work at Knox, I took two courses: Calvin’s Institutes of the Christian Religion taught by Dr. John Vissers, and The Long Scottish Reformation: 1510–1710 by Dr. Stuart Macdonald. I had taken at least ten courses on John Calvin, John Knox, and Reformed theology when I was a seminarian in Korea – and so I thought I already knew these subjects well. At Knox, however, they recaptured my interest immediately, because I learned a completely new way to approach church history and historical theology.

I used to study church history so that I could draw meanings from the past’s texts, events, and notable figures and then simply apply them to our time, or predict the future. For example, “Here’s what the Reformers said! We can edify our church by following their example, just as it was.”

But the courses at Knox made me think about the social and global context of church history. Soon I realized that before, I had only cared about the results, not the process or the context. Now after being trained, I realize that the Reformation was not just a product of the main characters – and so I am trying to revisit the stories of people in history who have received relatively little attention. Thanks to scholars’ recent research, I can encounter many lesser-known figures’ stories.

By the same token, I decided to seek further study on the reformation of worship in Scotland. Just as those of us alive now have encountered changes in worship because of this unusual pandemic situation, churches in the Reformation were required to cope with various challenges and changes in their worship. Sometimes they accepted the changes, and sometimes they strongly resisted them. Some of the changes have now become firm traditions.

The Reformed understanding of communion, for example, changed not only ministers’ sacramental theology, but also congregations’ actions at the communion table and even the elements of worship service. Further, not only people’s ecclesiastical life, but also their social life changed.

These are the changes I’m studying. The reformation of worship was far more radical than I had initially thought, and it had a great impact on people’s everyday lives as well as on theology and on worship style. As a student and as a minister, I would like to discover more about what happened “on the ground” and what we can learn from that history. By reviewing the past, we also may be able to think about what to adopt and accept according to our beliefs and the new situations we are facing.

Joon Won Kim graduated from Knox College in May 2019 with a Master of Theology degree. He is now in Knox’s Doctor of Philosophy program.