Empowering the exploited: becoming a community of embrace 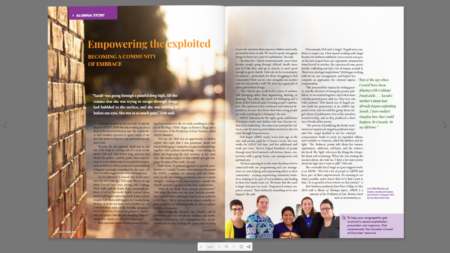 “Sarah* was going through a painful drug high. All the trauma that she was trying to escape through drugs had bubbled to the surface, and she was reliving it before our eyes. She was in so much pain,” Deb said.

Sarah was involved in the sex trade. It was the summer of 2007, Deb’s first day working at a local drop-in for street-involved people. She and another staff member expected to spend much of the day with Sarah, to help her cope and make sure she stayed safe.

“Because she was agitated, Sarah was in and out of the drop-in, causing a bit of a scene on the street,” Deb said. “But before long, someone had alerted the police – and the police then took her away in a very violent way. It was painful to watch, and painful to see others on the street just watching it happen, seemingly entertained by the scene. All of us on staff struggled with what had happened.

“As we debriefed, I learned that Sarah and I were the very same age,” Deb said. “But at the age when I would have been playing with Cabbage Patch dolls and My Little Pony, completely unaware of evil in this world, Sarah’s mother’s pimp had already begun exploiting Sarah. I just couldn’t imagine how that could happen. In Canada. In my lifetime. It broke my heart, and it baffled me. As I tried to make sense of this horrible situation, I knew I needed to do something about it. That became my prayer: How do I do something? How do I change this, and prevent this from happening?”

That experience ignited Deb’s passion for helping those involved in the sex trade, resulting in a Master of Theology (ThM) degree at Knox College and a new mission of the Presbytery of East Toronto, called ARISE Ministry.

“For me, the ThM was an opportunity to further explore this topic that I was passionate about and found challenging. I wanted to tie practical knowledge together with academic knowledge. I was writing my thesis and beginning the new ministry at the same time. My studies helped to fuel ARISE and give language for some of the work,” she said.

Deb’s thesis, “A pastoral approach to juvenile prostitution in Canada,” became a foundational document for ARISE, a resource for training staff and volunteers. As she was writing, prostitution laws in Canada changed – making it even more timely to consider the church’s pastoral response and the laws’ implications.

“How do we think about juvenile prostitution?” Deb asked. She notes that the term “juvenile prostitution” is problematic (although it was in use in academia at the time). “We’re talking about minors, sexually exploited minors, not individuals who are able to consent in their participation.

“My writing also discusses the Church’s role in prevention and care for at-risk children and youth. Church communities and congregations have an important role to play in being safe spaces, and in trying to provide ministries that empower children and youth, particularly those at risk. We need to speak out against things we know are a part of exploitation,” she said.

“At times the Church unintentionally causes harm because people going through difficult family issues may feel like they can’t go to church, or aren’t good enough to go to church. How can we be a community of embrace – particularly for those struggling to find community? How can we come alongside one another and love one another well? We don’t do a great job of talking about hard things.

“The Church also needs to be a place of embrace and belonging rather than stigmatizing, labeling, or shaming. Very often, the search for belonging and a desire to feel wanted is part of young people’s exploitation. The exploiters foster emotional and relational dependency, because they know that what young people are really searching for is belonging,” she said.

ARISE “advocates for the rights, goals, and dreams of women, youth, and children who have become victims of sex trafficking”; the name is an acronym for Advocacy and Reclaiming Individuals involved in the Sex trade through Empowerment.

“It’s been amazing to see the ways that those who’ve connected with our programming and case management are now helping and empowering others in their community – creating empowering community initiatives, helping to be part of reconciliation and healing in their own family units, etc. We know that the reach is larger than just our work. ‘Empowered women empower women.’ That’s definitely something we’ve seen happen,” she said.

One example, Deb said, is Angel. “Angel’s story continues to inspire me. I first started working with Angel because she had been trafficked; over a several-year period she had escaped from one exploitative situation but found herself in another. She experienced some pretty horrific trafficking and had a lot of trauma around it. There were also legal implications.” Deb began working with her in case management, and helped her complete an application for criminal injuries compensation.

“She processed her trauma by writing poetry, and she dreamed of having her poetry published. As we worked together, she’d often share a freshly-penned poem with me. They were raw with emotion.” Deb shared one of Angel’s poems (with her permission) at an ARISE supporter event, and she told the group about Angel’s dream of publication. One of the attendees wanted to help, and so they produced a short run of books of her poetry.

“The process of producing the books motivated and empowered Angel in profound ways,” said Deb. Angel decided to use her criminal compensation funds to create an expanded edition, now available on Amazon, called The darkness and the light. “The ‘darkness’ poems talk about her trauma, exploitation, addiction, self-harm, and the violence she faced. The ‘light’ references the things she is hopeful about and reclaiming. When she was creating the second edition, she told me, ‘I have a lot more poems about the light that I want to add,’” Deb said.

She eventually hired Angel as a peer support worker at ARISE. “She’s led a lot of people to ARISE and been part of their empowerment. It’s amazing to see what’s possible, and to know that we’ve had a part in that. I’m so grateful to bear witness to that journey.”

Deb Stanbury graduated from Knox College in May 2016 with a Master of Theology degree. ARISE is a ministry of the Presbytery of East Toronto; learn more at ariseministry.ca.

To help your congregation get involved in sexual exploitation prevention and response, Deb recommends The Canadian Council of Churches’ resource.