A posture of de-escalation: learning alongside inmates 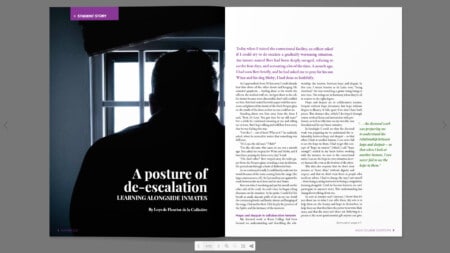 Today when I visited the correctional facility, an officer asked if I could try to de-escalate a gradually worsening situation. An inmate named Bert had been deeply enraged, refusing to eat for four days, and screaming a lot of the time. A month ago, I had seen Bert briefly, and he had asked me to pray for his son Winn and his dog Moby; I had done so faithfully. 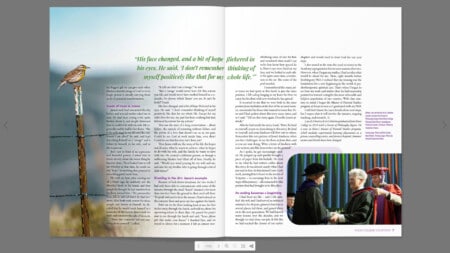 As I approached, from 30 feet away I could already hear him above all the other shouts and banging. He sounded apoplectic – hurling abuse at the world, the officers, the medical staff, etc. As I got closer to his cell, his shouts became more discernible, but I still couldn’t see him. Bert had coated his toilet paper with his excrement and plastered the inside of the thick Perspex glass on the inside of the door, so that no one could see in.

Standing about one foot away from the door, I said, “Bert, it’s Loys. You got time for an old man?” For a while he continued swearing at me and telling me to leave. But I kept talking and told him I was sorry that he was feeling this way.

“Get the f— out of here! Who is it?” he suddenly asked, when he seemed to notice that something was different.

“I’m the old man who came to see you a month ago. You asked me to pray for Winn and Moby, and I have been praying for them every day,” I said.

“Oh, that’s who!” Bert swiped away the toilet paper from the Perspex glass, revealing a man in distress. He peered out through a bush of disheveled hair.

As we continued to talk, I could barely make out his words because of the noise coming from the range (the large common area cell). So I pressed my ear against the crack between the steel door and its steel frame. Bert saw what I was doing and put his mouth on the other side of the crack. In a soft voice, he began a long discourse on his situation. As he spoke, I could feel his breath as small, staccato puffs of air on my ear. Amid the continuing hustle and bustle, shouts and banging of the range, I listened to Bert. I felt deeply the presence of the Spirit, and the intimacy of the moment.

Hope and despair in collaborative tension

My doctoral work at Knox College had been focused on understanding and describing the relationship, the tension, between hope and despair. In this case, I meant tension as its Latin root: “being stretched,” the way stretching a guitar string brings it into tune. The strings are in harmony when they’re all in tension to the right degree.

Hope and despair are in collaborative tension. Despair without hope devastates, but hope without despair is illusory. It falls apart if we don’t have both pieces. This abstract idea, which I developed through course work at Knox and interaction with professors, as well as reflection on my own life, was foundational for my future ministry.

In hindsight I could see that the doctoral work was preparing me to understand the relationship between hope and despair – so that when I look at another human, I can never fail to see the hope in them. I had to get this concept of “hope in tension” (which I call “hope enough”) settled in my heart before working with the inmates. So now in the correctional units, I can see the hope in every situation, in every human life, even at the bottom of the abyss.

This idea also requires that we don’t treat inmates as “lesser than,” without dignity and respect, and that we don’t treat them as people who need our advice. I had to change the way I saw myself – from being a caring instructor to being a companion, learning alongside. Until we become learners, we can’t participate in anyone’s story. This understanding has changed everything about me.

So now as inmates and I interact, I know that it’s not about me or what I can offer them. My role is to help them see the beauty and hope in themselves, to help them see that they have the power to rewrite their story, and that the story isn’t done yet. Believing in a person is the most quintessential gift anyone can give, the biggest gift we can give each other. I believe that the image of God in every single person is already carrying those seeds of potential transformation.

Seeds of hope in James
James’s wife had miscarried the day before, and a social worker asked me to visit. He had been crying a lot, quite broken about it, and deeply distressed that he couldn’t be with his wife. He repeatedly said he had let her down. “She is the only angel in my life and the only reason I am alive!” he said, and kept describing himself as a “savage” and a failure to himself, to his wife, and to life in general.

But I saw in front of me a precious and beautiful person. I asked him to think silently about the worst thing he has ever done. Then I asked him to tell me whether at that time, he could see any “hope” or anything that pointed to something good inside him.

He told me how, after coming out of a blind rage, he suddenly saw the bloodied knife in his hands and four people he thought he had murdered on the floor around him. (The paramedics were able to save all four.) At that moment, filled both with sorrow for those people and horror at himself, he decided that he would mark himself as a reminder of this horror. James took his knife and cut down the side of his neck.

“Does this ‘reminder’ tell you anything about yourself” I asked.

His face changed, and a bit of hope flickered in his eyes. He said, “I don’t remember thinking of myself positively like that for my whole life. Except for my wife’s love for me, my past has been nothing but hate followed by sorrow for my actions.”

This was the start of a long conversation – about failure, the miracle of restarting without failure, and the power of a love that doesn’t see us as our past. Could he see God at work inside him, even then? Could he see that his story isn’t done yet?

Then James told me the story of his life, his hopes and dreams; what he wants to achieve; what he hopes to do with his wife, and the family he wants to have with her. He seemed a different person, as though a suffocating blanket had lifted off of him. Finally, he said, “Would you mind praying for my wife and me, and also for my brother who is going through a lot of dark times?”

Kneeling in the dirt: Jesus’s example

Because of lock-down situations, for two weeks I had only been able to communicate with some of the inmates through the small “hatch” situated a bit more than two feet from the ground in their steel cell door. To speak with and to hear the inmate, I had to kneel on the concrete floor and press my face against the hatch.

Peter sat on the floor looking back at me, his face inches away through the hatch, and told me about his upcoming release in three days. He passed his prayer mat to me through the hatch and said, “Loys, please put this under your knees.” I thanked him, and we stayed in silence for a moment. I felt an almost overwhelming sense of care for him and wondered what could I say to let him know how special he is. Peter’s eyes were fixed on my face, and we looked at each other for quite some time, a tenderness in the air. The noise of the pod receded.

I remembered the many prior times we had spent at this hatch in just the same position. I felt a deep longing in my heart for Peter to enjoy his freedom with new wisdom he has gained.

It occurred to me that we were both in the same posture Jesus had taken at the feet of the accused woman, surrounded by those who wanted to stone her. Peter and I had spoken about this story many times, and so I said, “Tell me this story again. Describe Jesus’s attitude.”

After he had retold the story, I said, “Peter, be kind to yourself, as you see Jesus doing in this story. Be kind to yourself, and your kindness will flow out to others. Remember this very picture of Jesus’s kindness, when you face challenges: sit on the floor as Jesus does, and as you are now doing. Write a letter of kindness with your actions, just like Jesus writes on the ground.”

As I spoke, he got increasingly excited. He jumped up and quickly brought a piece of paper from his bedside. He read to me what he had written earlier about this story. It was almost exactly what I had just said to him. In that instant I saw God’s work, joining Peter’s heart to the stories of Scripture – to encourage him in the next steps of his journey – all connected to this posture that had brought us to this place.

An ending becomes a beginning

I had lived my life – and I felt satisfied. My wife and I had served as ordained ministers for 36 years, planted churches in several places, led them, and passed them on to the next generation. We had learned many lessons over the decades, and we thought we had done our job. It felt like we had reached the closure of our earlier chapters and would need to trust God for our next steps.

I also sensed at the time the need to return to the Academy as preparation for our next seasons of service. However, when I began my studies, I had no idea what would be ahead for me. Then, eight months before finishing my PhD, I realized that my training was the foundation for a new beginning in the world of psychotherapeutic spiritual care. That’s when I began to see how my work and studies thus far had inexorably pointed me toward caring for the most vulnerable and helpless population of our country. With that ministry in mind, I began the Master of Pastoral Studies program at Knox as soon as I graduated with my PhD.

I still don’t know the exact details of our next steps, but I expect that it will involve the inmates, ongoing teaching, and research.

Loys de Fleuriot de la Colinière graduated from Knox College in 2019 with a Doctor of Philosophy degree. He is now in Knox’s Master of Pastoral Studies program, which includes experiential learning placements at a prison, counselling centre, and forensic hospital. Inmates’ names and details have been changed.