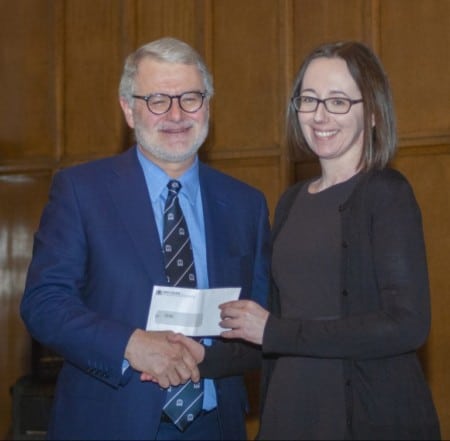 Emily Webb received the 2019 Chris Vais Community Award at Knox’s Graduand Celebration on Friday, March 15. Knox’s Graduand Celebration is an opportunity for College faculty, staff, and students to congratulate graduating students. Emily, a Knox resident and don, is completing Knox College’s Master of Divinity program in May 2019. The Rev. Dr. Charles Fensham, professor of Systematic Theology at Knox, acknowledged the contributions of each graduand. About Emily he said: “Emily, minister of the church, inspires peace through her quiet competence in loving care and faithful witness towards others.”

The Chris Vais Community Award is presented to a theological student in his/her graduating year who has contributed to the Knox Community in an exceptional way by having a pastoral and community-building influence on the College. Knox’s faculty, staff, and students elect each year’s recipient; Principal John Vissers presented the award.

The Chris Vais Community Award was established in 2002, in memory of the Rev. Dr. Chris Vais, by classmates who graduated with him from Knox in 1987. Each year Chris’s classmates and friends honour his memory by making a financial donation to this award.

Chris served on the Mission and Theology Society Executive Committee, sang in the Knox College Choir, and participated fully in both resident and academic life. He was known to be generous in spirit, with a deep reservoir of compassion and great gifts of hospitality and welcome.

Ten years after graduating from Knox, in January 1997, he was diagnosed with amyotrophic lateral sclerosis (ALS); he died just five years later, at age 39. Principal Vissers said, “Throughout his illness, Chris maintained a deep spiritual life and continued to bear witness to his faith and hope in Jesus Christ. Even after he was no longer able to speak, he did so through his writing and by communicating in other ways.”

Before Chris’s death, Knox conferred on him an honourary Doctor of Divinity degree, in recognition of his outstanding leadership even at such a young age. Principal Vissers said, “Chris truly represented the best of what Knox hopes to see in its graduates – and the impact and influence that they can have in the church and in the world.”

Come celebrate with the graduands receiving their degrees at Knox’s 175th Convocation on Wednesday, May 8, 2019. Find information about this year’s convocation events – and the special anniversary location – here.